The company called on 16-year-old Carter Wilkerson to set a Twitter record to win a year of free chicken nuggets. 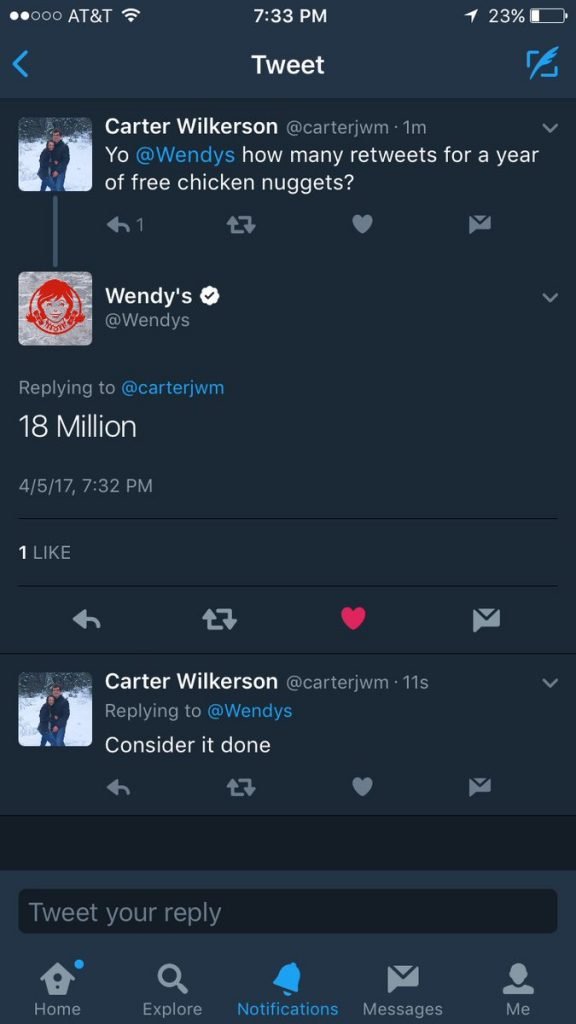 2017 has been Wendy’s year of social media stardom, and with a recent Twitter challenge to a fan, its popularity continues to grow.

On April 5, 16-year-old Nevada-native Carter Wilkerson tweeted at the fast food chain, asking “how many retweets for a year of free chicken nuggets?”

Typically, you’d expect a company such as Wendy’s to not respond at all to a question such as this. However, Wendy’s social media continues to amaze, and it quickly and cleverly responded to Wilkerson with a challenge: “18 million.”

Wilkerson took on the challenge. And unsurprisingly, it’s gone viral. Starting his own Twitter campaign, #nuggsforcarter, Wilkerson has gained a substantial following and he’s on track to set a new record for most retweeted post of all time, with 2.7 million retweets (as of this article’s publication). Ellen DeGeneres’s Oscars selfie currently holds the title for most retweeted post at 3.2 million.

From sassy responses to trolling McDonald’s on social media — Wendy’s has put itself in the social media spotlight multiple times this year. Asked about this new rebellious tone, a Wendy’s spokesperson shared with Entrepreneur, “We see ourselves as a challenger with charm, so we can take advantage of opportunities to engage with our fans in very different way from our competitors.”

So far, it’s working. So whether you run a small business or a large corporation, there’s much to be learned from the fast food chain.

“The responses we get from brands that come off as ‘corporatey’ are major killers in building meaningful relationships with younger generations. We want to talk to a peer, not a robot,” says AJ Agrawal, CEO and co-founder of engagement app Alumnify. “A year of free chicken nuggets was a decision that was made fast and decisively. Whoever was responsible had the authority and backing to make the call to do it. Trust was the backing of the action.”

Brands can’t underestimate the power of social media — it connects us. “Either you embrace it or you allow it to engulf you,” entrepreneur and author R.L. Adams shares. “If Wendy’s social media manager hadn’t thrown down the gauntlet and given a fixed, concrete number, there wouldn’t have been this ensuing race or challenge. Considering that the internet almost always roots for the underdog, the social media manager played the right hand by presenting a real goal.”

let's get started on your social media. contact us.